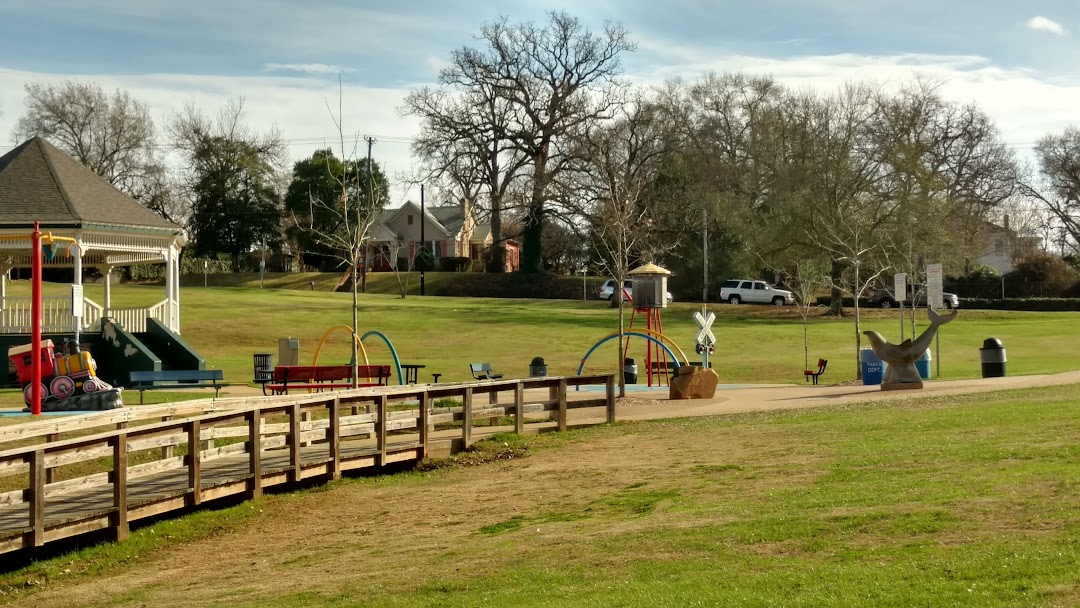 Super great park. Set up for different ages and sizes. Even handicapped swings. Splash pad for the summer. Lots of places to sit have a picnic and plenty of parking.

Beautiful park. The old High School is absolutely beautiful. I only wish I could have went inside. Just beautiful!! ️

The park has different playgrounds depending on the age group, which I think is great.. nice train like features and a caboose to take pictures.. kids had a great time

Great place for kids play. We had meeting under the pavilion up by museum as it was a little more private. A little trash but it was not bad.

Took 2 of my grand kids there today and they had a blast. Clean and well taken care of, gonna have to bring them back again to play. Plenty for them to do and it looks like theres water for them to play in during the summer.

Beautiful centrally located city park. Has a free water park and plenty of activities for the kids. City does great job of keeping it up. Also historic location with statues and a museum.

Clean, spacious, picnic tables, a pavilion, and lots to play on. Trash cans are all over, also has accomodations for special needs children such as wheelchair accessible swings and other nice touches.

My kids had a great time. I like the country feel to it. Its right next to the towns old HS, which is now a museum. Reagan Park would be a great place to have a BDAY party for the kids.

I took my 1 year old out to the park for the first time...I enjoyed it very much and she did too got to walk around some

Nice park. Lots of slides and swings and glides and spinners.

Very beautiful park and a great place to bring kids, have a picnic, or a small get together.

His is a fantastic park. Great place for the kids to run and play and play equipment for all ages. Splash park is great during the hot days. Could use a few more places to sit and nibble a bite but all in all

Great park for the kids has a variety of activities they can play with especially the Splash Pad.

This Park has been around for Years. I enjoyed it as a kid and my son enjoyed it Growing Up. Love It.

This park is very special to us when we come here! We usually go to church stop for a donut and walk over to the park to play. It really has everything and is totally stunning. Typically pretty quiet although we have not been at all times of the day. We go there everyday with our three and one year old boys when we are in town. Highly recommend, be sure to enjoy it and pick up after yourselves. This park was likely a sizeable investment in the members of the community and should be cherished.

Kids love the park all different areas to play

Nice place to relax and let your kids run free. Very visible surroundings and lots of big trees. The water park is small but fun. (Only open in summer). Parking is very accessible.

It was fun my 2 grandbabies had alot of fun.

Great park at base of hill from the old school. Would have given it 5 stars but the splash pad wasnt on, tho posted hours state that it should have been, and it was 100 degrees. We had 4 very disappointed kids with us.

Been going here since I was a kid, very fun park

Nice place kids park and a Pavilion great place to stop and take a break in the middle of the day or just anytime. And has a great statue of John Henninger Reagan (October 8, 1818 – March 6, 1905) was an American politician from the U.S. state of Texas. A Democrat, Reagan resigned from the U.S. House of Representatives when Texas seceded from the Union and joined the Confederate States of America. He served in the cabinet of Jefferson Davis as Postmaster General. After the Confederate defeat, he called for cooperation with the federal government, an unpopular position. He was elected to Congress in 1874, after his predictions of harsh treatment for resistance were proved correct.He also served in the U.S. Senate from 1887 to 1891, and as chairman of the Texas Railroad Commission. He was among founders of the Texas State Historical Association.The artist was Italian. The young Roman represents the Lost Cause, the defeated Confederacy. Thirteen stars on his helmet and the Confederate battle flag in his lap, forlorn expression. I guess.  He was also called the old Roman too.

Good. It was cold so we didnt stay long but we love the park. I did notice that some of the equipment looks like it is cracking and not being maintained. And obviously they are still having some kind of drainage issues on the park because there is still spots of standing water. We do enjoy having somewhere to go and play outside and this is the only place to go for us.

I love this park. It has lost of things for kids to do and it even has an awesome splash pad. There is plenty of open space to run around to. You cant ask for a better park!

Great place for family fun!! Clean kids zone with lots to do, love all the history right here in the park, if you get a chance tour the museum in the old school house, it might be small but its super cute and very educational about the area.

Fun safe place to take your kids! I prefer going on weekday during normal peoples working hours! The place is normally clean, my 2yr old always has fun. The park has multiple stations for differing ages of children. Also the splash pad is great during the summer! Not to mention its all free.

Love this park. My childhood park. They did so many renovations and I enjoyed it going back to visit .

Pretty park. The recent rain had definitely done some damage as far as flooding the playground. The splash pad looked fun. We will be back later in the summer for sure. It was a hot Sunday afternoon but we found plenty of shade and there were so a lot of other people enjoying the park. I would love a history lesson in the beautiful old building right there I believe its the old high school.

My grands love this park. It is so clean

The vastness of time, the integrity of real Christian manhood and virility is portrayed and memorialized here in this one small corner of the city park.

Went there for a picnic with the girlfriend. Nice clean park. We had fun

Nice place to walk to and sit under the trees. Have loved this place since I was a kid..

Very nice place been coming here since I was very little

It is a great place for walking and to bring children to play. The playground is well equipped.

A quaint lil park. Kids loooove it. I love it. If u havent been, go! Bring food and kids! Have fun. Bring water for sure.

I wish the maintenance was better, playgrounds need tons of much for safety.

This is a great park! Family friendly and easily accessible from the main road. The only down side is there are WAY TOO MANY fire ant beds. My kids get in them every time we go :/. But other than that the park is excellent!

My little ones love going and playing in the water. The park has lots of fun things and lots of slides!

Its nice and not overcrowded. Very relaxing

Great place for family to enjoy a day at the park!

Its big and plenty of grass! And fun equipment to play on!

A lovely place to take the family or spending time with a loved one. It has an area to have a covered picnic for a large group, or have one in the there in the grass. Theres an area for the kids to play and, I believe, at night they still play movies.

My children like this park. There is a bathroom but no doors. And they turn the water on at their little water part.

Always have fun at the park. Kids love it and that is enough for me.

A fun railroad-themed park with a playground, splash pad, lots of picnic tables, trees, and fields.

Reagan Park is our favorite sunny day destination in Palestine! We love the splash pad, especially since they added the new pavilion over the splash pad. Nice and shady, with no sun in your face! They also added more picnic tables with little awnings over them, as well. Overall, a great, free place to spend the afternoon with the kids. They also rent out the various pavilions for birthdays/events. We have had several birthdays there, but never reserved anything because we didnt have many guests, like 10-12. But, for larger guest lists, i would recommend to reserve.

We love the splashplad and having picnics here.

Reagan Park is a beautiful place to come and relax, with family and friends, the little water park addition, is totally awesome for the children, whoever thought of that, was really on his/her job or mission to come up with the idea, and bring it into fruition, awesome job, I really love the waterpark!!!

They have covered picnic tables and pavilion. So, the splash pad is covered! Age appropriate play equipment. Tennis courts.

The water sprouts were not working so it a little disheartening

A clean and safe place for kids to play and families to gather. Play equipment is maintenanced regularly. City of Palestine employees do an amazing job of keeping the grounds groomed and litter free. Tons of running space for children and pets. Picnic tables throughout the park for fun family lunches. Pavilions are available to rent from the City of Palestine for events at very reasonable costs.

Needs better & safer restrooms! BUT, I am excited about the awnings over the splash pads! It would be great to have some over the slides & swings too, they were too hot for the kids to play on.

I love Reagan Park been going there since I was young but the bathrooms could use some doors.

The tables to sat at while the kids play. All the activities for kids

Pretty city park. Free use of all ammenities.

Neat place for kids to play

My granddaughter had so much fun there

My eyes have never before beheld such majesty and wonder!

Great place for children to play and parents to watch.

Beautiful park, splash pad and separate area for the big kids and little ones so your little one has somewhere safe to play

Great place for a family to spend the day

Great park.. they have upgraded it alot I the last several years

The park is clean water feature is great.The restrooms are not that good

Love bringing my kids here. They live it.

Many areas for family fun

Fun place. Pavilions need to be maintained better. Found glass everywhere. Otherwise a good place to relax and for the kids to enjoy being kids

Great park, they have done tons of improvements. Kids have lots to do

Great place to walk and get some exercise.

Pretty and well kept. Excited for splash pad to open this summer. Only complaint is not the most toddler friendly park. Their is only one swing for small babies/toddlers and it is away from the nice new playground equipment. I also sometimes have to worry about the big kids as is normal some parents dont watch them and they could run right over my little one. But when it is slower/not as many kids the bigger kids watch out for her and usually come say hi and try to interact with her and she loves it.